If you’re downtown at the Tehran Grand Bazaar  why not try on one of the eateries in the bazaar otherwise called the “city within a city,” several of them are tucked away in nooks and crannies all over the bazaar, and the food is just sublime!

If you’re downtown at the Tehran Grand Bazaar  why not try on one of the eateries in the bazaar otherwise called the “city within a city,” several of them are tucked away in nooks and crannies all over the bazaar, and the food is just sublime!

During Nowruz shopping period, you’ll see many people shopping and there may be long lines to get into the most popular places.

Living in Tehran lists the best restaurants to eat in the Grand Bazaar catering for almost all tastes (vegetarians have limited options in Iran). There are foods to suit all tastes in the bazaar. However, if you’re looking for Mongolian barbeque, you’ll need to head elsewhere.

On the street with the same name, Khayyam Traditional Restaurants is one of the more famous eateries in the Grand Bazaar.

The location of the restaurant is south of the Khayyam Metro Station and is part of the old fabric of the Grand Bazaar.

Carved out of a portion of an old mosque, the restaurant is part of a 300-year-old complex. Serving the usual affair of barbequed kebabs and rice dishes, the restaurant has an air of sophistication to it.

Reviews suggest the restaurant is slightly more expensive than other eating places in the Grand Bazaar.

My wife got me into this place. Another unknown staple of the daily bazaari lucheons is the Marvi Alley falafel shop is one of the most inexpensive eating places to chow down. 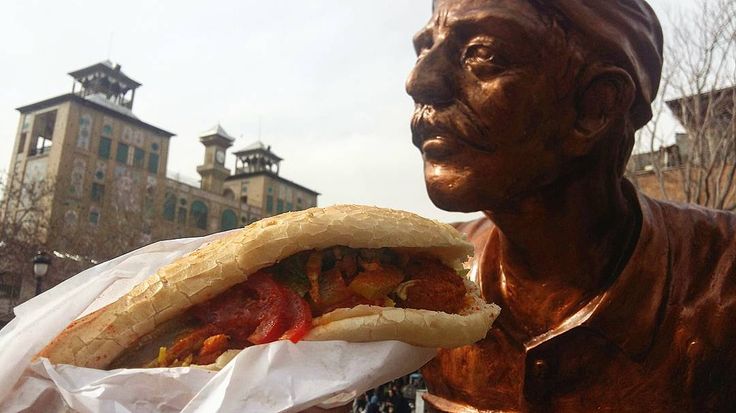 Just outside the Grand Bazaar on Naser Khosrow and Marvi Alley intersection, the takeaway has grown in prominence in recent years with many hipsters and families eating a massive falafel sandwich prepared under a minute. One key to the takeaway’s successes is the delightful spicy sauce available in bottles! Do remember to take the bottle back to the shop after you eat, as they owner gets moody with people stealing his sauces.  (This eatery is a great place if you’re not into meat and dairy)

The most famous place to eat in the Grand Bazaar is Moslem Restaurant. For reasons lost on me, the restaurant is the busiest place to eat – bar none. You are likely going to have to queue outside the restaurant  for ten minutes or so and then squeeze up the tiny staircase where an attendant will greet you.  Once there, you are likely going to have to eat on a table with someone else.

What is interesting, however, how quick the food comes when you are seated. Split over three floors in a tiny footprint; the restaurant has grown in cult appeal with locals and foreigners alike in recent years. The speciality of the restaurant is Tah Chin who is a delicious chicken breast and rice dish baked in a cake-like shape! The restaurant does delicious kebabs too, according to friends we dined with.

One that my wife’s family often agrees to eat at is Sharaf al-Islami restaurant, a lovely hidden gem of a canteen for the local ‘bazaari,’ Offering a range of traditional Iranian foods at break-neck speeds, the restaurant has a grimey charm which has become an institution of the Grand Bazaar. Portions are also pretty hefty with the range of foods on offer likely to bloat you for the rest of the day walking around.

The easiest way to find the restaurant is to head to Imam (Shah) Mosque and head right through the main courtyard. When in there head through the Crystal Maze-like metal bars which attempts to stop trolleys but catches shoppers with more than one bag. Then immediately on your right, head down the stairs and follow the scent of perfectly cooked Persian rice.

Top websites for renting and buying in Tehran

Subscribe to our newsletter
Sign up here to get the latest news, updates and special offers delivered directly to your inbox.
You can unsubscribe at any time
Tehran Time
Follow us!
Weather Forecast
29° C 28° C